As predicted by scientists and international research bodies, the locust invasion that has been prevalent in Kenya, Somalia and Ethiopia has spread into Uganda.

The first sight of these deadly insect was reported in Abwalinga and Ngongosowon villages in Amudat Sub County, Amudat District, on Sunday, February 9, 2020. Reports by the Ugandan media indicate that the locusts have now left Amudat and are headed to Nakapiripirit and Bulambuli. Residents of Kololo have also reported these destructive insects as of 11th February.

Heavy rains experienced across East Africa last week has enabled the reproduction and movement of the insects that have grown by up to 500 times. It is feared that the insects could spread into South Sudan in the coming weeks. These East African countries affected by the desert locust invasion face severe cases of food insecurity if the current trends continue.

The current situation in Kenya based on reports as of 27th January 2020, indicate that the swarms are rapidly moving from their initial entry and invasion point in North Eastern Kenya to the central and North Western regions.

If these trends continue, the swarms are most likely to spread further into Uganda and South Sudan. 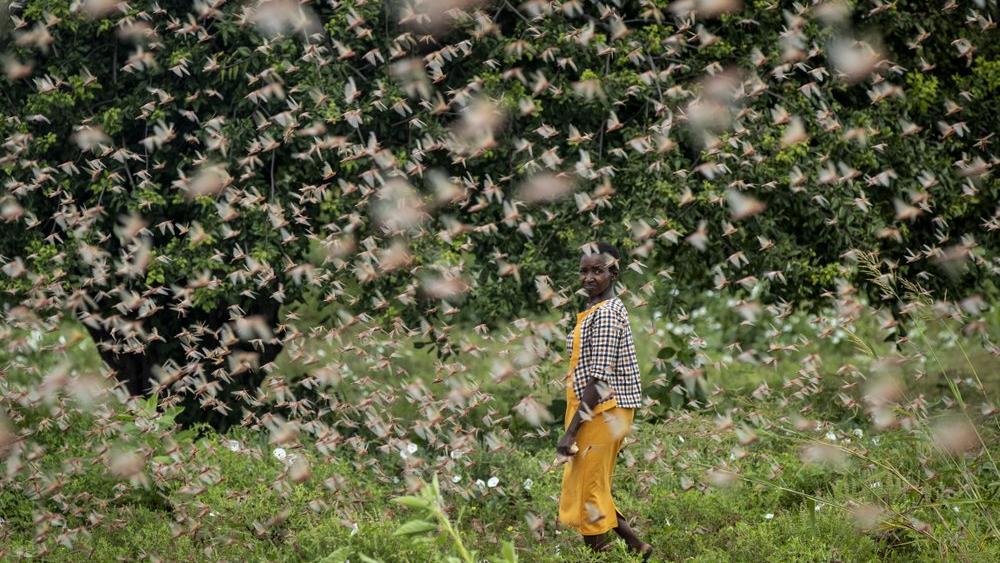 Governments have joined the UN’s food agency and other partners in scaling up aerial spraying and ground control operations in at-risk areas. The Ugandan government through the Ministry of Agriculture, Animal Industry and Fisheries (MAAIF)has activated surveillance and rapid respond measures and established a $1.35 million contingency fund to support the efforts. Upon the first sighting of the insects on Sunday 9th February, the Minister of Agriculture, Animal Industry and Fisheries Hon. Henry Aggrey Bagiire dispatched consignments of pesticides to the affected and at-risk regions.

The ministry is further sensitizing the public on how to identify these hoppers and report any sighting to the authorities, by conducting door to door visits in Karamoja region.

It is estimated that approximately 70 million US Dollars is required to tackle this attack that is threatening food security and livelihoods in Eastern and Central Africa.

The UN through its emergency fund, the Central Emergency Response Fund earlier in the year released to the Food and Agriculture Organization 10 million US Dollars to scale up aerial spraying and ground control operations in at-risk areas. It is projected that containing the swarms could take more than six months.

Sustainable partnership and pooling together of resources are needed to contain this upsurge that threatens the livelihoods in the region. Experts have warned that under a worst-case scenario, where the current locust upsurge is not quickly contained and becomes a plague by the next cropping season of March to July, significant crop and pasture losses would cause food insecurity in affected areas to worsen

Quick Facts About the Locust Invasion

A 1km2 swarm can consume the equivalent of food for 35,000 people in one day.

Each 1km2 locust swarm is made up of approximately 40 million locusts but swarms can reach hundreds of millions. One swarm in northeast Kenya was estimated at 2,400 km2.

Locusts could be controlled by bio-insecticides

485,000 hectares of land targeted for rapid locust control in the three affected countries.