According to the United Nations International Children's Emergency Fund (UNICEF), despite global decline, malnutrition is on the rise in sub Saharan Africa, in part, due to poor diets. Households in the region do not have access to adequate nutritious foods due to lack of proper storage systems, and high costs of nutritious foods. The generally rising cost of living has led to an overdependence on staples such as grains and tubers at the expense of nutrient-rich foods that include fruits, vegetables, meat, fish, eggs and dairy.

Smallholder farmers who account for over 60 percent of the food produced and consumed in the continent, remain to be the most vulnerable to challenges and shocks within the agricultural sector including climate change, market, knowledge, information and technology access.

Notwithstanding the numerous interventions adopted for increased agricultural productivity, there is much more needed to be done to protect the harvest. Reducing post-harvest losses (PHL), is a viable strategy to improving food security and nutrition in Africa. 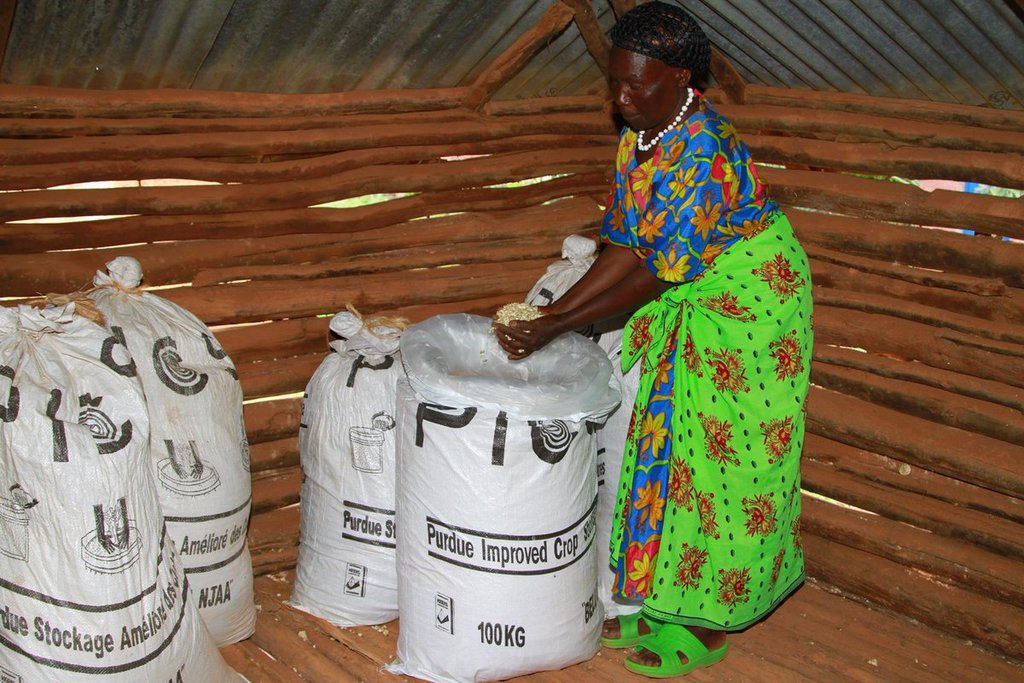 A farmer using hermetic bags to store grains. The bag keeps off storage pests for over 2 years

Evidence from a recent Food, Agriculture and Natural Resources Policy Network (FANRPAN) study in sub-Sahara Africa reveals that farmers have inadequate capacity and technologies to ‘protect their harvest’, with annual post-harvest losses estimated at between 35-50 percent of produced food. These losses occur at different stages of the value chain from harvesting, to transportation, storage and consumption.  Much higher losses are reported for fruits, vegetables, and dairy products.

Globally, ending poverty, increasing food and nutrition security, promoting responsible consumption and production are part of the Sustainable Development Goals (SDG) 1,2 and 12 respectively. Post-harvest management is framed as an indicator for SDG 12.

Ending hunger and malnutrition remains a priority towards achieving the African Union’s (AU) AGENDA 2063. Further, as part of the targets under the Malabo Declaration on Accelerated Agricultural Growth and Transformation for Shared. Prosperity and Improved Livelihoods, AU member states committed to ending hunger by 2025, with a specific target to halve post-harvest losses. However, the second Biennial Review Report released in February 2019 showed that only four countries were on track to meet Malabo Declaration commitments by 2025, while only 7 were on track to deliver on the PHL targets.

Evidently, the continent must accelerate progress towards building resilient food production systems in line with Agenda 2063.

“We are losing over 30 percent of what we produce, while the continent continues to suffer from hunger and malnutrition. The majority of our smallholder farmers need viable and sustainable ways of securing their harvest. Reducing postharvest losses will improve their livelihoods and ensure regional food and nutrition security.” said FANRPAN Chief Executive Officer, Dr Tshilidzi Madzivhandila in a recent PHLM Virtual Dialogue facilitated by FANRPAN. The dialogue hosted a broad stakeholder base that included farmer organizations, policy makers, the private sector, and development partners including ASARECA.

The PHLM Virtual Dialogue discussed a recent study conducted by FANRPAN in Madagascar, Malawi, Tanzania, Zambia and Zimbabwe, that revealed that all of these countries do not have a stand-alone policy on Post Harvest Loss Management. This is detrimental to the global goal of attaining food security and reducing poverty by 2030. A Post-Harvest Management policy is necessary to govern stakeholders and enable favourable environments for handling post-harvest loss.

It was also noted that governments in these countries have allocated a PHLM budget that is highly unproportionate to the amount of food lost every year. FANRPAN is therefore calling upon governments and development partners to work together in allocating a PHLM budget proportionate or even higher than the amount for food lost annually, to ensure interventions to improve food security in the region.

While there is need for post-harvest management of cereals and pulses like maize, beans and rice, it is very prudent to put in place measures to secure other nutritious food commodities like fruits and vegetables. One way of achieving this is by promoting effective value chains, expanding markets and involving the private sector in policy formulation to create a beneficial investment environment.

Reinforcing the sentiments of the FANRPAN CEO, Hon Sindiso Ngwenya, the former Secretary General of COMESA and an active food systems policy champion, said “We need to put in place innovative ways to ensure that we are not only storing cereals and pulses, like maize and rice, but also other nutritious food commodities like fruits and vegetables.” Emphasizing the need to develop and implement appropriate post-harvest policies and strategies as a viable alternative to achieving food and nutrition security, Hon Ngwenya added, “Instead of producing more, we should increase the amount of food available by ensuring that most, if not all, of the food produced reaches the consumer.”

With the world’s population projected to surpass 9 billion people by 2050, Africa is estimated to contribute to more than half of that increase.

To meet this growing demand for food, production must increase by 70 percent. However, production resources including land and water are limited in addition to the effects of climate change.

“Post-harvest losses are expensive to our economy and a major threat to food and nutrition security. There can be no sustainable food systems when over 30 percent of food produced using limited production resources is lost or wasted along the supply chains” added Hon Ngwenya during the virtual dialogue.

Despite numerous technologies and innovations having been developed to address the various causes of food losses, their wide scale adoption by farmers is yet to be noted. This is partly because smallholder farmers may not be aware of them or cannot afford them. Some technologies are also unsuitable for the African context.

Creating awareness about the applicable technologies and demonstrating their benefits is one way to improve uptake. This strategy has been used in promoting hermetic storage bags for grains. Hermetic storage is a proven solution for the threat of storage pests like weevils which attack stored grain. Its adoption has risen because of stakeholders’ concerted efforts.

The following are some of the key recommendations by FANRPAN as discussed during the PHLM Multi-stakeholder Virtual Dialogue.